Did David Cameron's comments at Prime Minister's Questions - "the good news will keep on coming" -  today move the sterling exchange rate?   The first estimate of UK GDP in the third quarter of 2012 will be released tomorrow, and he will have seen it this morning; not surprisingly, his remarks have therefore been interpreted as signalling that the numbers will be good. For example, Nick Robinson said:  "The PM was giving a strong hint that tomorrow's GDP figures will be positive".

Does this matter?  Politically, not so much; the figures will be out tomorrow and they will be whatever they are. We plebs can wait.  But it does matter to markets; these figures are highly market sensitive, especially if they're better or worse than expected.  And the exchange rate clearly did move at about the right time: there was a significant upward movement in the sterling/dollar rate that began shortly after 12pm (I chose that rate because the US markets haven't opened yet, so it's less likely to be distorted by other news than the sterling-euro rate).

The vertical bar in this Bloomberg screenshot is at 12.09; the Prime Minister's remarks were reported (by the BBC and PoliticsHome) at 12.12. 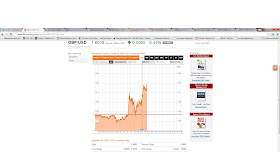 Now, if the PM was in fact doing what Nick Robinson thinks he was doing, it would be a clear contravention of the law: the Pre-Release Access to Official Statistics Order (2008) states:


6.—(1) An eligible person who receives pre-release access must not disclose—

..(c) any suggestion of the size or direction of any trend indicated by that statistic,

For the GDP statistics, the PM is an "eligible person"; he's on the ONS "pre-release access list".  A few quick points:

a) we definitely can't say that it was the PM's remarks that moved the markets; there's always lots of stuff going on;

b) equally, no-one can possibly say that the PM was referring to the GDP figures tomorrow; he can perfectly well say he was just expressing a general view that the economy was on the mend.

But more broadly, this episode illustrates the problems with the current system. The worry about giving Minister pre-release access is precisely that this information is market-sensitive (as well as politically sensitive); so not surprisingly markets will try to read whatever they can into whatever Ministers say in between them getting access and the statistics being released. So it doesn't really matter if the PM was in fact not thinking about the GDP figures at all; it's the perception that does the damage.

So if Nick Robinson's interpretation is that the PM was talking  about the GDP figures, that's a problem. It undermines public trust in the independence and reliability of the official statistics, which in the long turn benefits nobody.  So I don't think there's much point going on about the PM's possible but unprovable violation of the rules; or of trying to establish exactly what explains market movements. But the case for doing away entirely with pre-release access, at least for Ministers, already strong, has just got even stronger.