Yesterday I wrote about Moody's decision to put the UK's credit rating on "negative outlook" - and why we should pay no attention at all.  What we should be worrying about is today's unemployment figures; but unfortunately there is no sign that concern will translate into meaningful action.


What the figures showed was not only a further rise in unemployment, but that it is becoming entrenched.   Jobseekers' Allowance is supposed to be, and until recently largely was, a short-term benefit for those who should be able to find work quickly. But the number claiming for more than a year has been shooting up, and is now well over 300,000; up more than a third over the last year. The number of young people claiming for more than a year has doubled.

Moreover, the damage this does is not just in the short term.  We know that unemployment (especially youth unemployment) has "scarring" effects; an individual experiencing a spell of unemployment has lower employment probabilities later in life, presumably because they become disconnected from the labour market, or their skills atrophy.  As the research that we and others conducted for the ACEVO Commission on Youth Unemployment showed, the potential long-term economic and social damage that is likely to result from the current levels of youth unemployment is huge.


And this - going back to the rating agencies - illustrates a point I’ve been trying to make about the balance of risks attached to the current stance of fiscal policy.   The most sensible argument against short-term fiscal stimulus comes from those (like Roger Bootle of Capital Economics - you can read Evan Davies' summary of  our Today programme discussion here) who argue that the risks to credibility of fiscal easing are large, while the potential gains are small.


In my view the risks are hugely exaggerated (see here and here).   But what is far less discussed is the downside of inaction.  If we do not do something to boost labour demand now, we are not just taking a risk.  We are accepting the future economic and social damage that will be done by these levels of unemployment.  [Those who want to see this explained rigorously in a cost-benefit framework should read Brad Delong for a brilliant analysis of this point.]

The key point here is that while active labour market policies (Jobcentre Plus and the Work Programme) are essential, a very large proportion of current and forecast future unemployment is the result of macreconomic conditions.  This chart (reproduced from my earlier, longer post here) shows the difference between the UK’s actual unemployment rate, and  estimates of the “structural” unemployment rate, also known as the “NAIRU” (the non-accelerating inflation rate of unemployment), from 1970 to the end of the Office of Budget Responsibility's forecast period.   This difference is sometimes described as the “unemployment gap.” 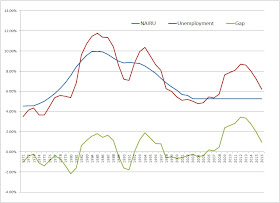 But how do policymakers respond to this failure of policy?  They pass the buck.  The Chancellor claims his hands are tied by the ratings agencies or the markets.  The Prime Minister says it is up to the Bank of England, because “we are fiscal conservatives but monetary radicals.” The Governor responded yesterday, by saying there's nothing he can do:

"Growth remains weak and unemployment is high. While the MPC can use Bank Rate or asset purchases to help ease the transition, there is a limit to what monetary policy can achieve when real adjustments are required."

These are counsels of despair.   It is not necessary to accept any specific macroeconomic policy prescription (a certain level of fiscal stimulus or a particular alternative approach to monetary easing) to recognise that macroeconomic policy ought to be able to do much better than this.  In 1925 Winston Churchill expressed his dismay that policymakers seemed to be


“perfectly happy with at the spectacle of Britain possessing the finest credit in the world simultaneously with a million and a quarter unemployed.”

We are making the same mistake, and we should know better.